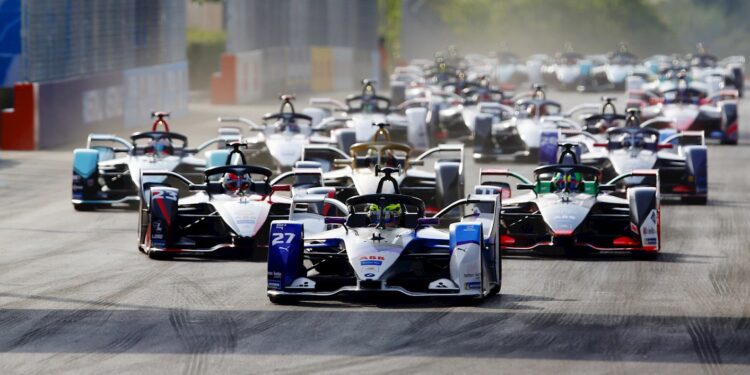 Formula E has a uniqueness that other racing events do not have. Formula E features Attack Mode and Fanboost that can help drivers perform overtaking actions on the track.

This feature is indeed a bit similar to the Drag Reduction System (DRS) in F1, F2 and F3 or Push to Pass (P2P) in Super Formula and Indycar racing events which both function to make the ovetaking action a little easier.

But the way the racers activate this Attack Mode is a little different. To activate Attack Mode, racers must pass an activation zone on a certain side of the circuit outside the racing line.

Racers must ensure that their car is in the right area, because often drivers fail to get Attack Mode due to their car not entering the activation zone correctly.

See also: Everything You should know about Formula E Gen3 race car

When you are in the designated area, the racer can press the Attack Mode button on the steering wheel and the power of the electric car will increase.

Viewers can tell which mode is being used through the LED in the Halo section and a blue light indicates that Attack Mode is being activated.

This Attack Mode will increase the car’s power by 30 kW so that the maximum power will be 250 kW when used.

The details regarding the Attack Mode (number and duration) will be determined by the FIA ​​one hour before the start of the race.

There are several moments where the Attack Mode does not apply, one of which is when the track is in a condition of a Safety Car or Full Course Yellow.

Oh yes, if the racers fail or forget to activate the Attack Mode, it is also certain that they will get a time penalty at the end of the race.

While Fanboost has the same way of working with Attack Mode, but only lasts for a maximum of 5 seconds and can only be activated towards the end of the race.

But unlike Attack Mode which is owned by all racers, Fanboost can only be activated by certain racers who get Fanboost voting from fans before the event starts.

In total there will only be three racers who get this Fanboost, depending on how many votes the fans make. When Fanboost is active, the LED in the Halo area will change to magenta.