by James Bryant
in Brand, Hyundai
0 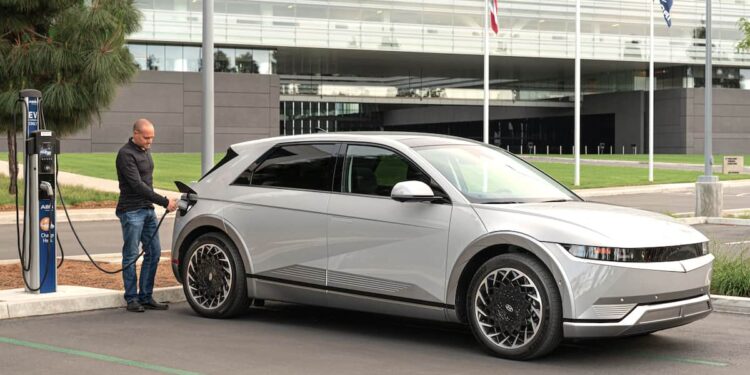 Hyundai has partnered with We Drive Solar, a Dutch mobility provider, to use 150 Ioniq 5 electric SUVs to create what is billed as the world’s first two-way energy system.

The city of Utrecht in the Netherlands will be the venue for the collaboration between Hyundai and We Drive Solar. In the Cartesius neighborhood, 2,530 sustainable homes will be built with shared vegetable gardens, walking and bicycle routes as well as car sharing access such as the Ioniq 5 from We Drive Solar using the app.

There will also be a two-way energy charging system which is the first in the world. The Ioniq 5 will be used to provide energy via a vehicle-to-grid capability using a dedicated two-way charging station. Initially there were 25 Ioniq 5s to be used for this project, growing to 150 within a year.

In Utrecht there have been more than 1,000 two-way charging points over the past three years. Bidirectional charging is not only for charging electric vehicles, it can also release power back to the grid when needed. Utrecht is the first city in the world to implement V2G technology on a large scale.

“With its unique Vehicle-to-Grid technology, We Drive Solar can use vehicles to store sustainable energy at scale, moving so far this year from 25 to 150 Ioniq 5 units,” said Robin Berg, director of We Drive Solar.

“Together with Hyundai, we will make Utrecht the world’s first city and region with a two-way energy ecosystem.”

“At Hyundai, we believe that bidirectional charging in combination with V2G technology can turn battery electric vehicles into a flexible power source,” said Michael Cole, president and CEO of Hyundai Motor Europe.