by Andy Williams
in Brand, Toyota
0 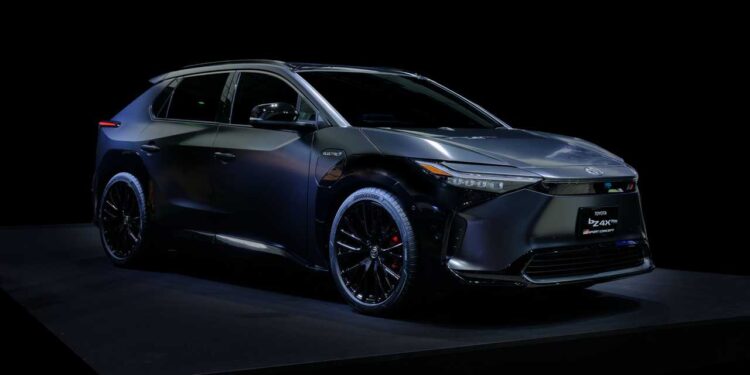 Toyota Gazoo Racing is working on bringing the Toyota bZ4X into the first electric car to have a GR variant.

Previously, the Toyota bZ4X GR Sport concept was introduced at the 2022 Tokyo Auto Salon. The Japanese car manufacturer plans to mass-produce it.

Although not releasing detailed specifications, the Toyota bZ4X GR Sport concept appears with large diameter wheels, a lower suspension, and a GR badge. To make it a mass-produced unit, Toyota had to ensure the upgraded bZ4X was able to deliver similar driving dynamics to other GR-branded vehicles.

See also: What we know so far about Toyota GR GT3 Concept

According to Daisuke Ido, the Chief Engineer in charge of the bZ model, admits that they are in talks about a new GR Sport variant, but the project has yet to come up with a concrete idea.

The Toyota bZ4X dual electric motor produces 215 hp and 336 Nm of torque. With the e-TNGA architecture, which will also support all future bZ models, which is claimed to be able to produce better performance.

“With the e-TNGA platform for the bZ series we can offer several variations, and a wide variety of products. Maybe several types of sports cars, or maybe large cars that provide more passenger capacity,” said Daisuke Ido.

In addition to the e-TNGA architecture designed for compact and midsize models, Ido confirmed that Toyota is also working on a smaller electric platform.