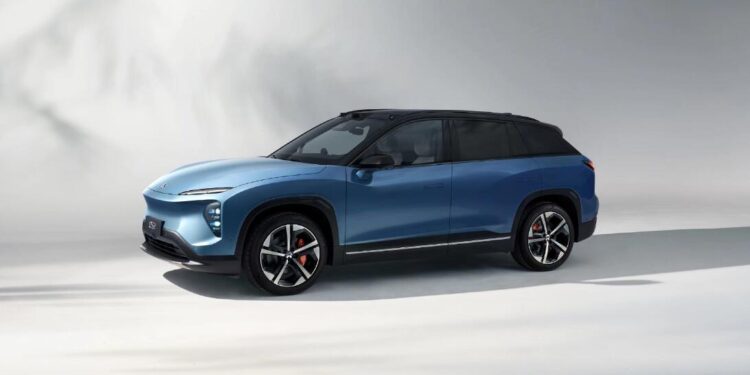 NIO officially launched the ES7 which is the company’s fifth production model. Customers can pre-order using the NIO app. The ES7 is slated for delivery starting August 28, 2022.

NIO ES7 uses batteries with capacities of 70 kWh, 75 kWh and 100 kWh. The three batteries are the batteries currently circulating in the NIO battery swap system.

From the exterior, the NIO ES7 still adopts the design language of the NIO X-Bar family. It features a closed grille to show the essence of its all-electric vehicle. The concave body panels not only reflect the simple front design, but also help the vehicle to be more aerodynamic. At the bottom, there is an A-shaped air duct combined with a silver skid plate. The dual-beam LED headlights echo with the double-dash daytime running lights.

At the rear, a scratched rear windshield accentuates the vehicle’s sporty demeanor, and a long rear spoiler can help generate downforce as air passes through it. The taillight cluster also adopts a trendy design that makes a slim light strip run along the length of the SUV.

The interior of the NIO ES7 looks similar to the ET7, the first production model to be built on the NT2.0 platform. In the ‘PanoCinema’ digital cockpit, such flaws can be seen, including a bridge-type center console, a flat-bottom steering wheel and two freestanding displays – a compact instrument cluster in landscape orientation and a large center screen in portrait orientation.

For power performance, the NIO ES7 inherits the second generation high efficiency e-drive platform with SiC power module. Acceleration from 0 to 100 km/h can be done in 3.9 seconds and braking from 100 to 0 km/h is 33.9 meters. The ES7’s coefficient of drag can be as low as 0.263.

The ES7 is one of the first certified passenger vehicles in China that can tow a caravan or trailer. It can supply power to towed equipment.

According to NIO, upgrades to the three existing models include the Digital Cockpit Controller, sensor hardware with enhanced compute/sensing capabilities, and greater flexibility for future functionality.

NIO also announced the launch of the ES8 Landmark Edition Pilot with a six-seat layout and an exclusive design package.