by David Smith
in MotoE, Motorcycles, Sport
Reading Time: 1 min read
A A
0 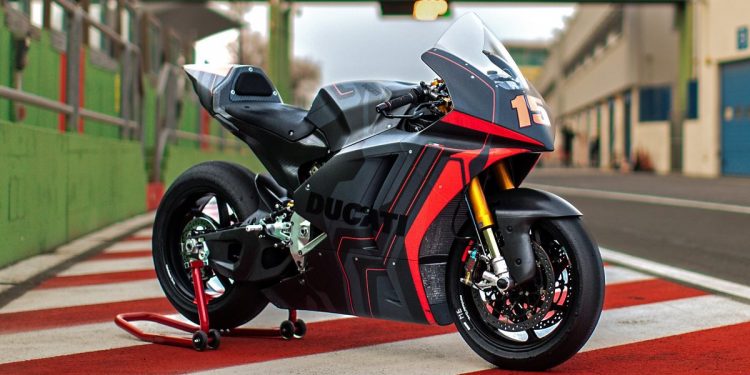 Ducati officially showcased the V21L racing bike that will be used for the MotoE 2023 championship at an exclusive event in Modena, Italy. In terms of appearance, the V21L looks almost the same as the prototype that Ducati tested earlier this year. The V21L looks more stylish, with a few touches of color on this electric racing bike.

The V21L still carries the line of Ducati racing motorcycle design with carbon fiber components and open components that add to the aggressive impression of this racing bike. The V21L itself is Ducati’s first attempt at developing a high-performance electric motorcycle.

Ducati design lines are still visible with an aggressive impression and maximum performance.

Dimensionally, the V21L weighs 225 kilograms, with half of the weight coming from an 18 kWh battery unit connected directly to the swing arm. The Ducati V21L can be recharged from 0 to 80 percent in just 45 minutes.

Ducati claims that the V21L features a purpose-built double circuit liquid cooling system that allows the race bike to be recharged without waiting for the battery, motor and inverter to cool down.

Lamborghini will invest at least $1.88 billion for their electrification plan