by Linda Ma
in Brand, BYD
Reading Time: 2 mins read
A A
0 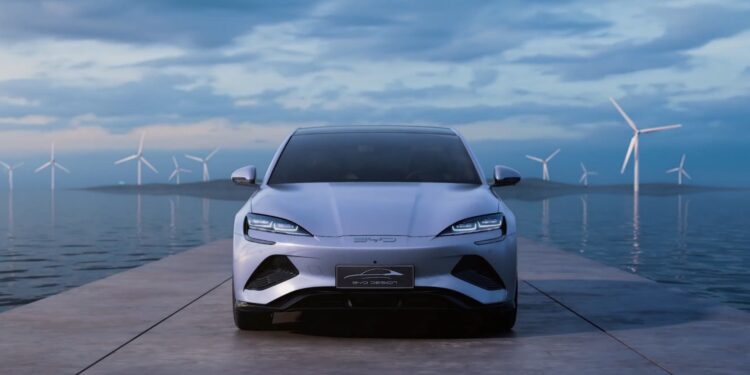 BYD Seal has just been introduced to the Chinese market. In the initial seven hours after the official pre-sale began, pre-sale orders for the Seal had reached 22,637 units.

This car is quite interesting from its exterior appearance because if you pay attention, it reminds us of a Porsche Taycan mated to a Tesla Model 3.

The BYD Seal will also be available for the Australian market. BYD importers confirmed with BYD Seal that they would be coming to Australia under the name Atto 4. The serious challenger to the Tesla Model 3 is set to arrive in the second quarter of 2023, although the pandemic and supply chain may change the schedule.

The Seal electric sedan is the first BYD model to feature CTB (cell to body) technology. CTB technology allows the battery to be integrated into the vehicle body itself. The BYD Seal measures 4,800 mm in length, 1,875 mm in width and 1,460 mm in height, with a wheelbase of 2,920 mm. If you look at its dimensions, this car could be a tight competitor for the Tesla Model 3.

Talking about the exterior design, the fascia is very similar to the Porsche Taycan EV sportscar, as can be seen from the aggressive headlamp model with LED technology. Then the curve of the bumper is also made as dynamic as possible without a grille, and there is only a ventilation cover that is possible to cool the brakes.

The sides are more like a Tesla Model 3 but with BYD’s own signature, only because the fastback shape makes it look identical. Moreover, BYD also embeds a set of aero alloy rims with a black polished dual-tone finish, different from the Model 3 which only has a cover.

Turning to the back, the design is quite compact with LED stop lamps blending from end to end, so that it looks futuristic. The rear bumper model does not have many extreme curves, there are only ventilation holes on each side and a diffuser to make it look more sporty.

Entering the cabin, we will see a futuristic feel with a large 15.6-inch center screen with features similar to Tesla, to adjust the air conditioning, audio, and so on. Then the digital instrument cluster is behind the 8.8-inch steering wheel. The gear lever is also a button model like a crystal so that it seems exclusive.

The feel of relief and luxury is added from the premium light blue leather that wraps the seats, dashboard, and center console to the door trim. There is a unique stitching motif and a knitted BYD logo on the headrest.

There are several models offered by BYD, including the following. Standard Range, RWD Elite, and Premium with 61.44 kWh battery capacity, rear-wheel drive, system output of 201 hp fast charging can charge 30-80% in just 30 minutes. With a distance of about 550 km on a single charge.

Then above it Long Range RWD and AWD Performance, battery capacity of 82.56 kWh, the normal output of 308 hp, with a mileage of 700 km. While the Performance version is 522 hp, Performance acceleration from 0-100 kph is only 3.8 seconds with a shorter distance of 650 km once fully charged.

This Tesla Model S comes with a sporty minimalist modification