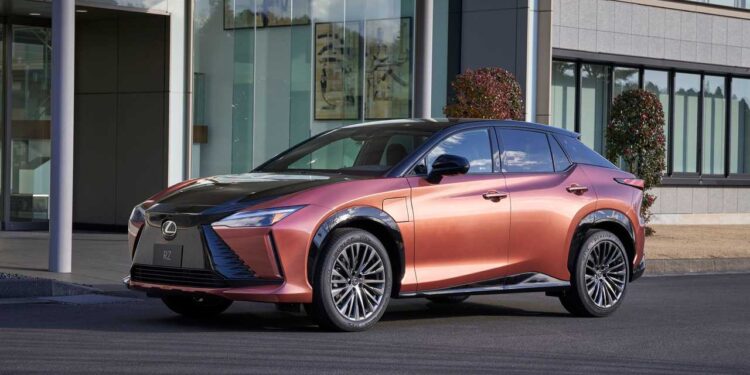 Toyota has just launched the Lexus RZ, a pure electric crossover that shares its platform with the Toyota bZ4X and Subaru Soltera. There are also some other similarities, but the RZ is more influenced by the Lexus NX.

Compared to the bZ4X, the Lexus RZ electric crossover/SUV has a much more luxurious cabin and a more elegant exterior styling. Indeed, the battery pack is on the same platform as the bZ4X, which is 65.6 kWh, the Lexus RZ powertrain adopts two motors that can produce more power in the range of 300 hp. Lexus calls the powertrain Direct4 combined with all-wheel drive (AWD) as standard.

Both the Lexus RZ, bZ4X and Subaru Solterra all carry the e-TNGA platform aka Toyota New Global Architecture for electric cars. Despite carrying the same platform, the Lexus RZ has a different body and interior design, both with the Subie (Subaru) and the bZ4X.

The exterior design of the RZ is made with a sharper style with a floating roof model, a ducktail spoiler and an aggressive headlamp design. Indeed, there are many similarities between the bZ4X’s exterior design and the RZ’s, but the basic difference can be seen from the front fascia design. The Lexus RZ grille still uses the disguised Spindle Grille model, only there is no ‘wasp’s nest’ because it is an electric car, the bZ4X version is simpler and ‘skimmed’.

From the exterior, the RZ is similar to the Lexus NX, both hybrid and petrol engines. The details are made somewhat sharp angles and intakes at the front are less. Judging from the flow, it might be in line with the Audi E-Tron. Why? Both are purely electric cars that still want to provide a conventional car driving experience so that consumers who still like Internal Combustion Engine (ICE) cars don’t experience jetlag.

Sure, if you really step back and study the RZ’s arched roof profile, you can trace hints of the bZ4X and Solterra, but thanks to the flared fenders, the protruding hourglass shape to the nose that echoes Lexus’ signature grille design, and it’s wide taillights. full, the Lexus stands alone.

The roof arch profile is similar to the bZ4X and Solterra, but the fenders are made more bloated with an hourglass-shaped grille. The grille design is indeed a typical Lexus grille style called the Spindle Grille. For the design of the taillights, it is made full length from the right side to the left side and is decorated with Lexus writing on the top.

Dimensionally, the RZ is more compact than the bZ4X with the same wheelbase length. However, the ground clearance of the RZ is half an inch shorter and the tread is made 3.5 cm wider. Regarding the spaciousness of the cabin, Toyota has not released detailed specs, but it seems more spacious than the two brothers.

In terms of interior, it’s generally simpler than the NX. The buttons and switches on the dashboard and doors are gone and to operate a number of systems in the car, all you have to do is press the pointer on the touch screen. The approach is the same as Tesla’s electric car. The interior feels quite roomy compared to when viewed from the outside. Wrapped in faux suede and synthetic leather. There are also porous wood accents and a rotary knob on the center console.

For the infotainment system and connectivity, it is served by a 14.0-inch touch screen that is installed wide on the dashboard. If you want to interact with the system, just touch the command on the screen or use the voice command system. The connectivity system has Apple CarPlay and Android Auto and can be connected wirelessly.

Another interesting feature on the RZ is the door opener like the one on the Lexus NX. So to get out of the door, just press the small button on the inside door handle. Plus a dimmable panoramic roof.

In matters of pacemaker, the Lexus RZ 2023 adopts a powertrain called Direct4. What is Direct4? That is the main technology in Lexus electric cars to improve vehicle performance, strengthen handling, control and increase driving pleasure. This technology was developed by Takashi Watanabe as Lexus Electrified Chief Engineer.

The Lexus RZ is offered in two variants, the RZ450e and the RZ 450e F Sport. Both use a 65.6 kWh battery like the bZ4X and Solterra. Able to cover a total distance of 362 km in one full battery charge. However, Lexus has not provided information about the onboard charger and fast charging facilities owned by the vehicle.