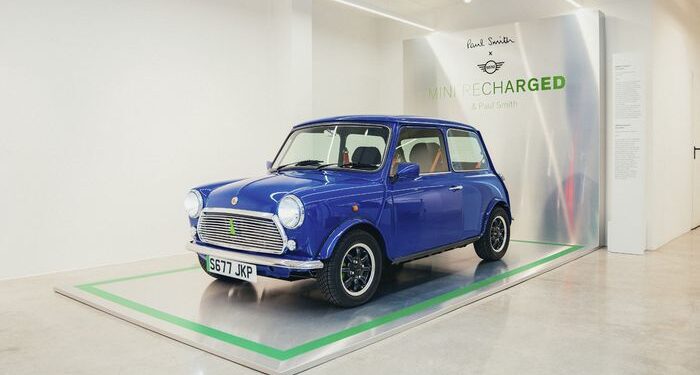 MINI has unveiled a project that restores and transforms this special classic Mini into an electric car (7/6). Yup, this new MINI project collaborated with designer Paul Smith and successfully converted a 1998 Mini Paul Smith Edition.

“Ideas are never a problem because they can be found anywhere. The challenge is to make it happen,” added Smith.

In appearance, this classic Mini converted to MINI Recharged retains the blue color that takes inspiration from Paul Smith’s shirts.

Not only blue, this classic Mini also has a lime green color typical of the 1990s on the components of the battery box and charger cable.

While the exterior still looks like other Mini Paul Smith Editions, the interior is actually designed to be simpler and more environmentally friendly.

Taking inspiration from the MINI Strip, the front cabin of this convertible Mini Paul Smith is dominated by the floor and body exposed without a cover.

See also: Small electric car that looks like an classic Mini has been patented in China

On the exposed floor, this classic Mini gets a simple rug made of recycled rubber.nThe dashboard still retains the typical Mini design which features a round speedometer and some classic model indicators.

Of course, this simple interior still gets a modern touch in the form of a magnet to put a cellphone. In addition, MINI and Paul Smith did not forget to embed a removable steering wheel to make getting in and out of the driver easier.

In terms of performance, MINI provides the Mini Paul Smith Edition with this conversion electric motor with a power of 72 kW or 98 hp. Unfortunately, MINI has not mentioned the battery capacity or mileage claims.