by Sibley Presley
in Tesla
0 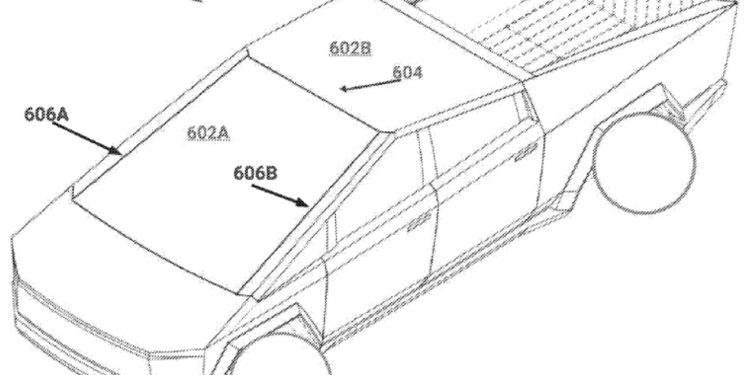 Tesla recently acquired a patent for an “Automotive Glass Structure having feature lines and related methods of manufacture,” and has now revealed details about the Cybertruck’s windshield. The patent was obtained on January 19th.

The company describes the glass in the patent:

Tesla has been granted a patent for a new type of glass that could be used in vehicles, including cars, trucks, and semi-trucks. Although the patent mentions multiple types of vehicles, the illustrations in the patent depict the Cybertruck and its interior.

When the Cybertruck was first introduced in November 2019, Tesla touted its special Armor Glass, which is designed to be difficult to break or penetrate. This feature is just one of the many that contribute to the Cybertruck’s durability and longevity.

Previous reports have revealed Tesla’s plans for high-durability glass, which include a “multi-layer glass stack” with a low chance of failure. This design features a thickness of between .5 and 1.1 millimeters, an adhesive interlayer, and a “non-soda lime, low-CTE, high densification glass” that measures between 2 and 5 millimeters thick on the outer layer.

The patent also describes “feature lines,” which refers to the ability of the glass to form structures with “aggressive curves or folds.” This feature is particularly relevant to the Cybertruck, as its exoskeleton features sharp and abrupt changes that are not typically found in other pickup trucks on the market.

Tesla said in the detailed description:

According to Tesla, the glass used in their vehicles can be manipulated through the application of heat. This process may involve the use of welding or an adhesive such as a polymer to join two pieces of glass together. The company has filed patents related to this technology in several countries including China, Korea, Europe, and Japan.