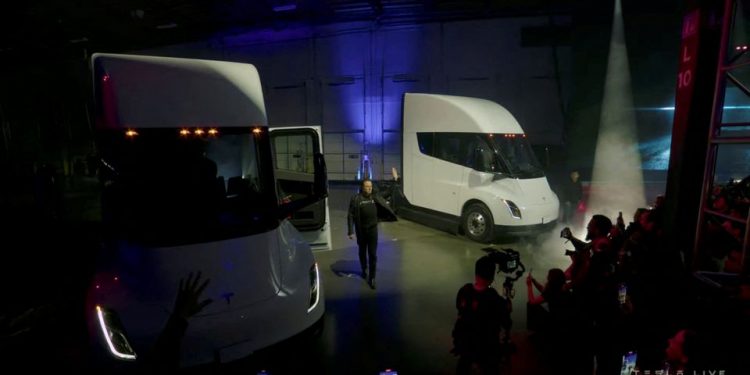 The event was also streamed live via the company’s YouTube Channel and marked Tesla’s first foray into the trucking industry.

Musk said the semi’s heavy-duty electric truck successfully completed a 500-mile test on a full charge on November 15 between Fremont and San Diego.

The Semi electric truck is a Class 8 vehicle, meaning it has weight limits that allow it to carry more than 33,001 pounds of cargo.

The Tesla Semi was originally going to start production in 2019 after being first introduced to the public in 2017, but plans were postponed due to battery constraints.

Tesla said other vehicles will use the powertrain in the Semi, and that the company will use trucks in its own supply chain to ship auto parts.

Musk said the Semi electric truck has three times the power of any diesel-powered truck, and is Tesla’s first vehicle and is aimed at reducing the trucking sector’s emissions which are huge compared to fleet size.

Tesla also says that the Semi will use its regenerative braking to recapture kinetic energy for increased efficiency.