by Shaun Williams
in Battery, Tesla
Reading Time: 2 mins read
A A
0 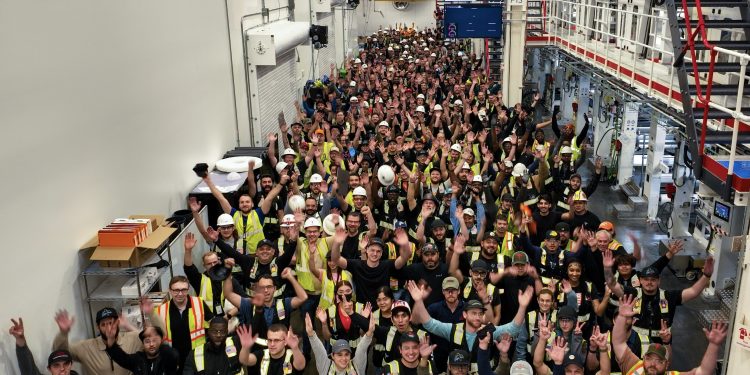 Tesla has announced that it is now able to produce enough of its new 4680 battery cells to equip around 1,000 electric vehicles per week. In a statement made at the end of December, the company revealed that it had achieved a production rate of 868,000 4680 cells in a single week, sufficient for the aforementioned number of cars.

This marks the first time that Tesla has disclosed detailed figures on 4680 cell production. Previously, the company had only provided information on the percentage increase in production, rather than actual rates. It is unclear whether the 868,000 cells produced in a week were solely from the Kato pilot line near the car factory in Fremont, California, or if they also included 4680 cell production at the Giga Texas facility in Austin. No further information has been provided by Tesla on the matter.

Congrats to the 4680 cell team on achieving 868k cells built in the last 7 days—equal to 1k+ cars! 🔋 pic.twitter.com/CaC7Js9aEL

It is currently uncertain how far Tesla has progressed in the production of its 4680 battery cells at the Gigafactory Texas. In July 2022, the company had announced plans to surpass the capacity of the Kato pilot line at the Texas facility by the end of that year, but there have been no further updates on the status at the Gigafactory since then. The 4680 cells, which are round and measure 46 millimeters in diameter and 80 millimeters in height, are being used in the Model Y electric vehicle, which is being produced at the Giga Texas facility.

However, due to insufficient 4680 cell production, Model Y variants with traditional battery packs and 2170 cells will continue to be produced alongside the 4680-based versions in Austin. The larger 4680 cells will also be used in the Tesla Semi and the upcoming Roadster 2. Therefore, the speed at which Tesla is able to ramp up its 4680 cell production will be crucial for the production of these models.

While Tesla will also source 4680 cells from suppliers, it is not yet clear when this will occur on a large scale. Tesla’s battery partner, Panasonic, is producing 4680 cells on a pilot line in Japan, but series production is expected to take place in North America, potentially at a new plant in Kansas set to be completed in March 2025.