by James Bryant
in News
Reading Time: 2 mins read
A A
0 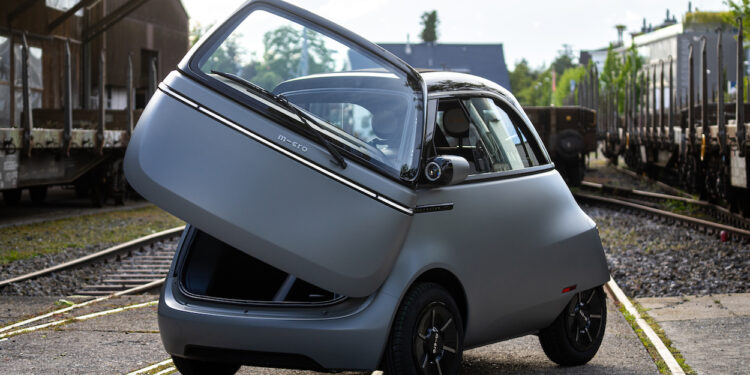 The trend of electric cars continues to grow, many manufacturers continue to issue new innovations to make electric cars more practical. Not a few who do it by making the dimensions smaller.

Like manufacturers from China, Wuling and Chery, which offer electric cars with dimensions that are quite small and very suitable for urban areas. In addition, the selling price is very cheap.

Not wanting to lose to the Wuling Mini EV or Chery EQ1, a European manufacturer, Micro Mobility System introduced the Microlino 2.0 Pioneer Series, a tiny electric car that officially launched on May 12, 2022.

As the name implies, the Microlino has quite small dimensions with a length of 2,519 mm, a width of 1,473 mm, and a height of 1,501 mm. However, the Micro Mobility System calls this a combination of a car and a motorcycle, in Europe it is called a quadricycle.

Microlino will be produced 999 units called the Pioneer Series. Later, the company will start full production when its factory in Turin, Italy is completed. The company claims to be able to produce one unit in just 20 minutes at the plant.

In appearance, the Microlino looks very small and is very suitable as a mobility tool in urban areas. Just like other electric cars, a futuristic impression is also embedded in its appearance.

Opening the door can only be through the front of the car, just like the classic BMW Isetta. At the front there are wipers, then the LED lights extend and narrow in front and the LED projector on the side of the car which also functions as a rearview mirror.

The inside is very minimalist, only the instrument screen is available and even the steering wheel does not have audio settings. The manufacturer only provides a bracket so that the phone can be connected via Bluetooth.

Although the interior is very minimalist, the manufacturer has also embedded features such as a sunroof, elongated seats with separate headrests, and a spacious luggage capacity of 230 liters. Speaking of seats, the Microlino can only accommodate 2 passengers.

As a small electric car, the Microlino is only capable of spewing power of 16.7 hp with a maximum torque of 89 Nm. With this power, this car has a maximum speed of 90 km / h.

However, each of these batteries has a fairly long distance, making it suitable as a mobility tool in urban areas. Starting from 91 km, 177 km, up to 230 km.

With standard charging, all these batteries can be fully charged in just 3 hours. Of course it depends on the weather conditions at the time of charging.