by Shaun Williams
in Kawasaki, Motorcycles
0 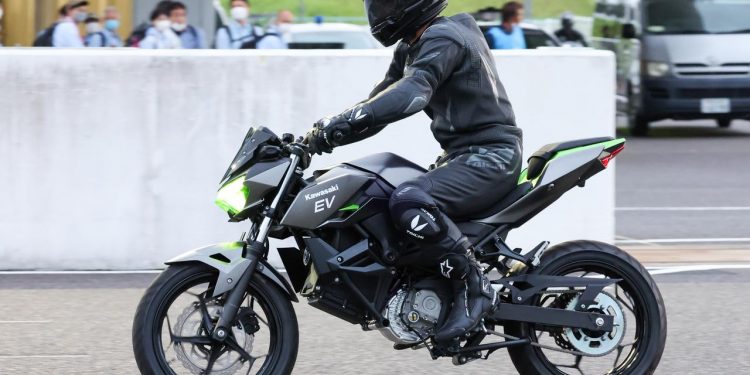 Coinciding with the Suzuka 8 Hours endurance event, Kawasaki surprisingly showcased and demonstrated its new product. Not just any motorcycle, but this is an electric motor sport genre.

In a Suzuka 8 Hours session, suddenly an EV sport bike appeared which is currently under development, namely the Kawasaki Z Electric. Seeing how it looks, in general this motorbike carries a design that has been applied to the Z250 naked sport bike.

This can be seen in the headlamp, along with the legs. The taillights are similar to those of the ZX-25R. While the handlebars use a short model, although it is not a clamp handlebar.

Then, the engine looked empty because it was replaced by an electric motor and battery. Including the exhaust was absent. Practically in this section an electric motor looks a lot different than a conventional motor. However, the rest looks still identical to the internal combustion engine motor.

The motor on display is an early prototype of Kawasaki’s EV project. The emergence of this motorbike is predicted because the trend of electric motors and batteries has developed rapidly compared to previous years.

In this demo run, Kawasaki did not make any announcements about the vehicle. But it is mentioned that the frame of this motorbike has differences compared to the Ninja 250 and Z250 which are equipped with internal combustion engines.