by Casper Benedict
in News
Reading Time: 1 min read
A A
0 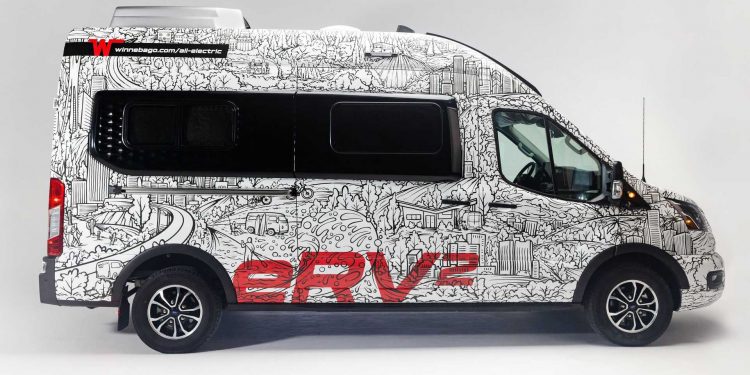 Winnebago presented the eRV2, a prototype of an all-electric motorhome, at the RV SuperShow in Florida. The eRV2 is an advancement of the company’s eRV concept from the previous year and is built on a Ford E-Transit electric chassis with an estimated range of 108 miles.

The American motorhome manufacturer has outfitted its concept vehicle with a 48-volt, 15-kWh battery pack located beneath the floor. This battery can power all the interior features for up to seven days without needing to be recharged from an outlet.

The prototype RV utilizes 900-Watt solar panels that charge the batteries located under the floor. According to the company, campers would need at least four hours of sunlight per day to last one week off-grid.

Even with solar panels, certain amenities like air conditioning and heating may not be available during periods of low power. However, outdoor enthusiasts can still enjoy cooking, showering, using the refrigerator, and running the roof fan overnight.

The American motorhome company, Winnebago, has unveiled the eRV2, a concept electric recreational vehicle (RV) inspired by “modern Japandi principles,” a fusion of Japanese and Scandinavian design. The eRV2 boasts a five-in-one sleep/lounge and two workspaces with built-in charge ports, as well as high-speed Wi-Fi.

However, Winnebago emphasizes that the eRV2 is only a concept and not intended for production in the near future due to the Ford E-Transit’s limited 108-mile range. The company will also be conducting a pilot program in Florida, California, and Washington for users to test the eRV2 and provide feedback.