What we know so far about MV Agusta Ampelio electric scooter

by James Bryant
in Motorcycles
0 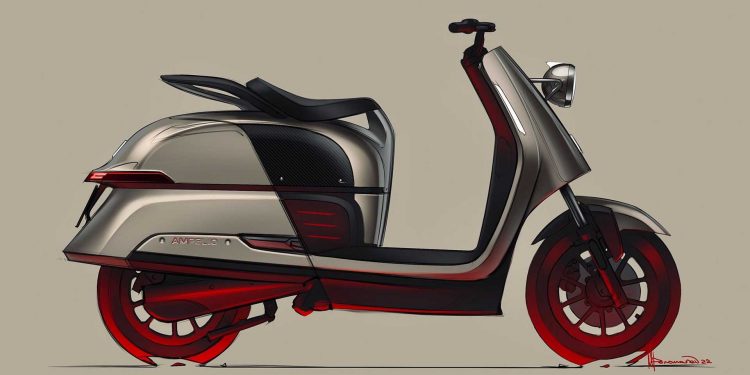 MV Agusta is better known as a manufacturer that makes aggressive style motorbikes, street fighters and cool sports. However, now the Italian manufacturer is starting to look at the urban transportation market, by presenting a modern electric scooter.

The EV scooter named Ampelio was developed by MV Agusta together with a company from Taiwan, Kymco. For design, this electric scooter was designed by Maksim Ponomarev, designer MV Agusta from Russia, and is different by taking inspiration from motorbikes from the 50s.

As can be seen from the rendering results, this motorbike has a rounded design with inflated edges that are often found on old European scooters, which is trying to return to Ampelio. There’s nothing wrong, because the design inspiration was taken from the classic MV Agusta Ovunque and CGT scooters from the 50’s.

The most prominent characteristic is seen in the round headlamp and body that looks bloated, but this extends to the back persists.

The difference is, the conventional gasoline engine on the back is no longer exposed, because it is tightly closed. Even though it looks old, there is a modern accent implied by the use of disc brakes and telescopic suspension at the front.

Even though it has a self-developed design, the platform area and electric motor technology are taken from Kymco. The electric motor used is based on Kymco S7.

MV Agusta Ampelio carries an electric motor with an average power output of 4.1 kW and a maximum power of 7.2 kW. The amount of power is regulated via riding mode which is divided into Normal and Sport types.

Meanwhile, the power source is obtained from two 1.7 kWh portable batteries of the Ionex type. Its cruising range is claimed to reach 85 km when the two batteries are fully charged.

Another feature is keyless ignition. Then there is the combi brake braking system with the addition of ABS which is still being evaluated for its application.

There’s no word yet on when the Ampelio will enter production or what its final price will be. Still, it’s an avant-garde-looking prototype for MV Agusta to step foot in EV doors with some proven battery technology and experienced partners.