Up Close with NIO ET5 Features and Specifications

by James Bryant
in Brand, NIO
0 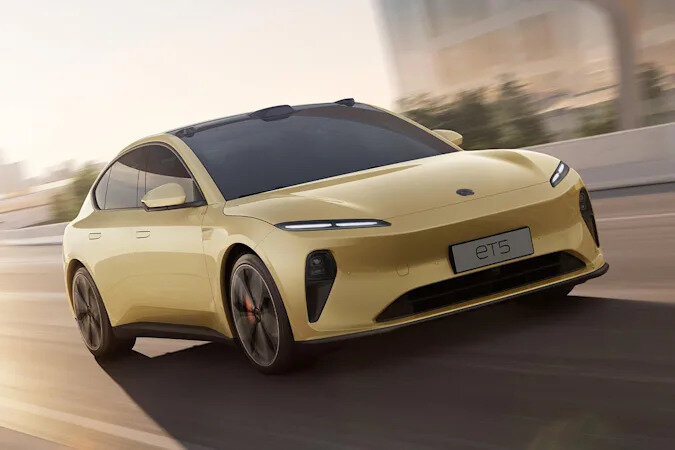 The NIO ET5 comes as an electric sedan, the younger brother of the ET7, which is ready to go head to head with the Tesla Model 3.

In order to fight his rival in power first, NIO did not forget to give ET5 a number of advantages.

First of all, the NIO ET5 has two electric motors that drive All-Wheel Drive (AWD) with a combined power of 489 hp and 700 Nm of torque.

The largest battery is claimed to have a range of more than 1,000 kilometers according to China Light-Duty Vehicle Test Cycle (CLTC) standards.

In addition to a capable drive and battery, the NIO ET5 is also equipped with three features that can actually make the Tesla Model 3 feel inferior, you know.

These Aquila sensors feed data to the NIO Adam supercomputer which gives the NIO ET5 the ability to drive autonomously.

In addition to the NAD, the interior of the NIO ET5 also features a PanoCinema digital cockpit that has Augmented Reality (AR) and Virtual Reality (VR) technology.

To make PanoCinema a reality, NIO partnered with NREAL to develop custom AR glasses and Nolo for custom VR glasses.

This feature is also combined with 256-color ambient lighting and a Dolby Atmos 7.1.4 surround audio system.

The third is NOMI which is an artificial intelligence (AI) in every NIO car. NOMI is not just a voice assistant, but a “travel partner” with which the driver or passenger can interact.

Foxconn : EV supply chain more stable in the second half of 2022

Foxconn : EV supply chain more stable in the second half of 2022