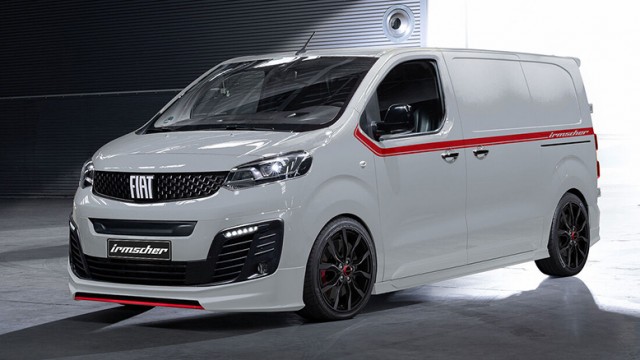 Generally commercial cars, made not too prioritize appearance. Even after being in the hands of the owner though. Looks as is, like out of the factory.

However, home modification from Germany, Irmscher gives a graphic touch to the Fiat Scudo commercial van.

Looks visible by giving bumper lips in front. This makes the look (fascia) more aggressive but not arrogant. The combination of body color and red accents makes it harmonious in color and design.

Other changes, by installing side skirts that extend on the lower body, then a spoiler on the roof, and a revised rear bumper.

While on the soles of the feet, aka the wheels, the use of rims ranging in diameter from 18 to 20 inches can be selected by the user. Although most are 18 inches, wrapped in thin-profile tires combined with springs that can lower the body height by 30 centimeters.

This Fiat Scudo is a commercial model of the Ulysse MPV, which is also a joint project with Peugeot to become an Expert/Treveller, Citroen (Jump/SpaceTourer, Opel/Vauxhall (Vivaro/Zafira Life) as well as Toyota ProAce and ProAce Verso, they all share the EMP2 platform ( compact car of the Citroen-Peugeot group).

This van, is offered in diesel engined or electric motorized versions. The electric model, known as the E-Scudo, features a 134 hp electric motor which can be coupled with a 50 kWh or 75 kWh battery pack.

The EV can charge at speeds up to 100 kW, which means it will take between 30 and 45 minutes to charge to 80 percent, for 50 kWh and 75 kWh batteries, respectively.