by David Smith
in News, Tesla
Reading Time: 2 mins read
A A
0 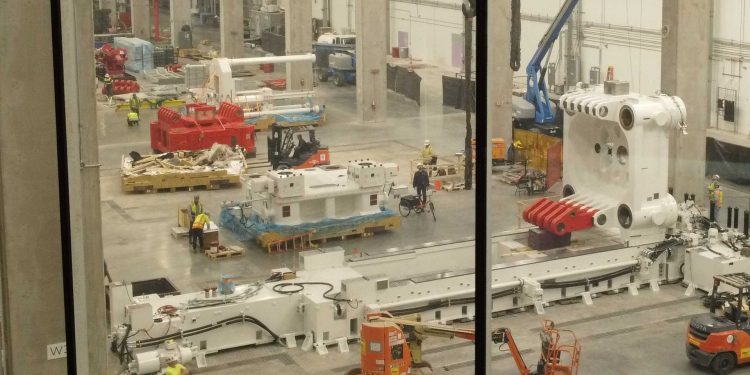 Technicians at Tesla’s Gigafactory Austin have reportedly begun assembling a 9,000-ton Giga Press from Italian die casting machinery maker IDRA Group. This machine, which has been spotted in the factory over the past few months, will be used to produce structural components for the Cybertruck.

Drone operator Joe Tegtmeyer, who has been closely monitoring the construction of Tesla’s Texas plant since the beginning, has captured images of the giant new casting machine being assembled inside the factory.

A drone flyover video shows that Tesla is currently in the process of assembling the Giga Press, the world’s largest aluminum die casting machine, at their factory. The machine can be seen partly assembled in a section of the factory where the Cybertruck body will be constructed.

Joe Tegtmeyer suggests in a tweet that there are three additional identical foundations to the one on which the first Giga Press is being installed in the factory section and that there is a large amount of unused space in the area, indicating that Tesla may receive three more mega casting machines from IDRA Group in the near future.

Friday the 13th! Don't get distracted by all the price cuts on Tesla cars, the real story is the assembly of the 9K-ton Giga Press! Here are a few images to get you started, much more on a busy Giga Texas in my YouTube video later today! pic.twitter.com/Gz6uaFCJ2M

The specific components that will be produced by the Giga Press are currently unknown, but a prototype of the Cybertruck frame was seen on the production floor in late 2020. However, Sandy Munro, an expert in the field, analyzed the photo and determined that the frame was not made from a single-piece casting, but rather from several sections.

The assembly of the Giga Press is promising for the over 1.6 million individuals who have expressed interest in the Cybertruck and suggests that Tesla is on track to begin initial production in mid-2023 as planned. According to insiders cited by Reuters in November 2022, mass production is expected to commence before the end of the year.

Despite the ongoing attention the Cybertruck receives, Tesla has yet to provide updated information on the production version of the vehicle, including final specifications and pricing. In 2020, Elon Musk acknowledged that the prices and specifications of the Cybertruck may differ from those originally presented at its 2019 unveiling, as the company continued to make changes.

Since Tesla removed the Cybertruck’s specifications and pricing from its customer website in October 2021, there have been no major updates on the product, aside from the confirmation that it will have a quad-motor powertrain, as stated by Tesla’s CEO.