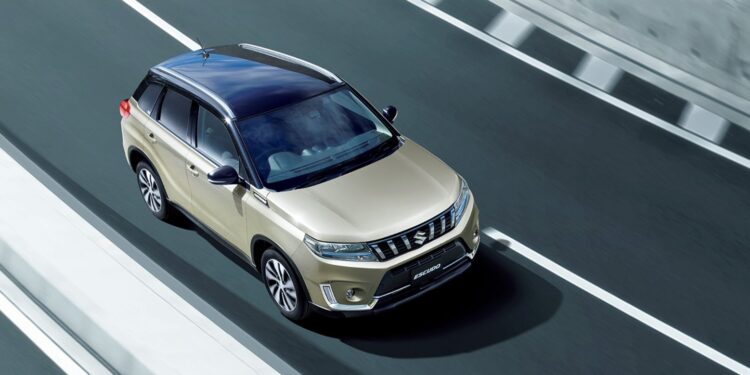 Suzuki has announced the Vitara in Japan which is equipped with a hybrid drive system. The fourth generation Suzuki Vitara was first present in 2014 and received several product refreshes.

In 2018, this SUV was equipped with a modern turbocharged engine, as well as the addition of 48V mild hybrid technology in 2020 which was increased to 140V in 2022.

See also: Everything You should know about Suzuki Vitara Full Hybrid

On paper, the Suzuki Vitara Hybrid can accelerate from 0-100 kph in 12.7 seconds, with a top speed of 179 kph for HEV. Meanwhile, the MHEV variant is able to achieve it in 9.7 seconds with a maximum speed of 190 kph.

The engine is mated to a 6-speed ASG automatic transmission with all-wheel drive. The driving models are Auto, Sport, Snow, and Lock, which provide off-road capabilities and improve performance. In some European markets, the Suzuki Vitara hybrid also comes in a front-wheel drive option with AWD as optional.

See also: First Pure-Electric Car from Suzuki due by 2025

For information, the Suzuki Vitara hybrid uses a 6 Ah battery which is larger than the mild hybrid variant, so it is installed under the front seat. Therefore, this SUV can move with electric power in certain scenarios such as deceleration or reversal of direction. Suzuki claims a combined WLTC fuel consumption of 5.1 lt/100 km.

Yamaha E01 is quieter and less vibration? This is the explanation