by David Smith
in Charging, Renault
0 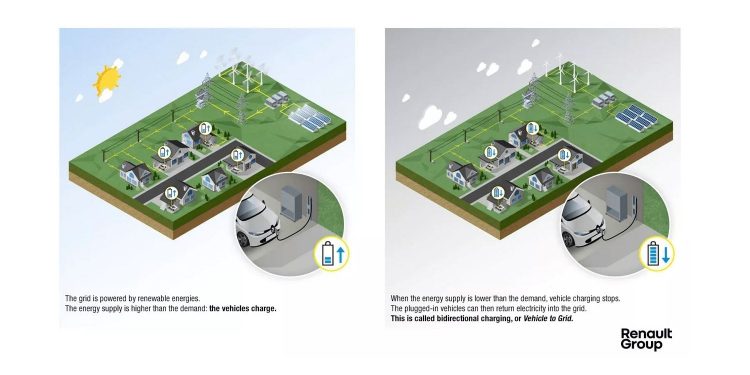 Renault Group and French research organization CEA are developing a highly efficient bidirectional charger for electric vehicles. The charger, set to be used in Renault’s production models by the end of the decade, aims to reduce energy losses during charging by 30%.

The improved efficiency is attributed to a new architecture for onboard current transformers, which will be made with new materials and integrated into the vehicles’ onboard charger. The charger will also have the ability to feed power back into the grid, and have a charging power of up to 22 kW in three-phase operation.

Renault has developed a new power converter based on eleven patents. The design, which took nearly three years of research, incorporates semiconductor materials such as GaN and SiC, improved capacitors and inductive components, resulting in a reduction in volume and cost.

Specific improvements include a more compact voltage converter made of ferrite materials and an innovative powder injection molding process. The new converter results in a 30% reduction in energy losses and heat generation, making it easier to cool the system. According to Jean-François Salessy, VP of advanced engineering at Renault Group, the project with the CEA exceeded expectations and holds great potential for power electronics in electric vehicles.