by Christopher Harrison
in Battery
Reading Time: 2 mins read
A A
0 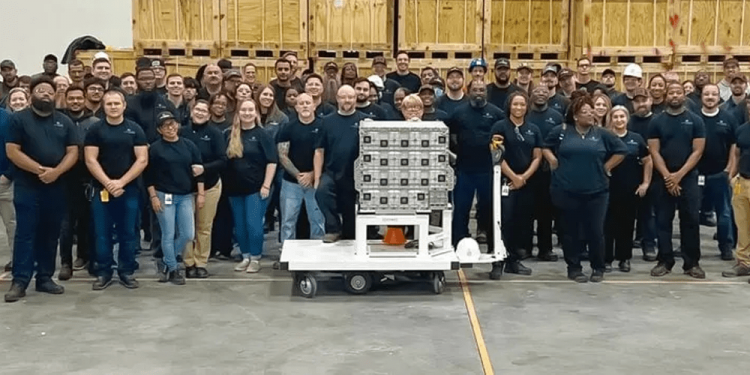 Proterra has begun assembly at its battery production facility, called Powered 1, in Greer, South Carolina. The facility will immediately manufacture battery systems for electric vehicles, with customer deliveries set to start this quarter.

As Proterra’s first high-volume battery production facility in the eastern United States, Powered 1 has a planned annual production capacity of several gigawatt hours. The facility will also produce powertrains and other auxiliary systems for medium- and heavy-duty electric utility vehicles.

The assembly of Proterra’s battery production facility, Powered 1, in Greer, South Carolina, began in January, delayed from its original start date in the second half of 2022. However, customer deliveries are still planned for the first quarter of 2023. Although referred to as a “production facility,” Powered 1 does not produce battery cells, but instead assembles ready-to-install battery systems and their components. Proterra purchases the cells from LG Energy Solution.

Proterra CEO Gareth Joyce. “At full scale, we believe Powered 1 will be the largest battery manufacturing facility in the United States dedicated exclusively to electric commercial vehicles, and we’re poised to meet the incredible opportunities that lie ahead for zero-emission transportation.”

Proterra, a company known for its electric buses and batteries for commercial vehicles, has been experiencing success in the industry. However, it received a further boost at the end of 2021 when BYD, the world’s largest electric bus maker, was disqualified from receiving subsidies for public transport and school bus tenders by new national legislation.

In the past year, Proterra has signed battery supply agreements with The Shyft Group, which will use Proterra batteries in its Blue Arc electric delivery vehicles, as well as with Nikola for its Tre BEV and FCEV trucks in a multi-year contract and with Vicinity Motor Electric for utility trucks, shuttle buses and box trucks.