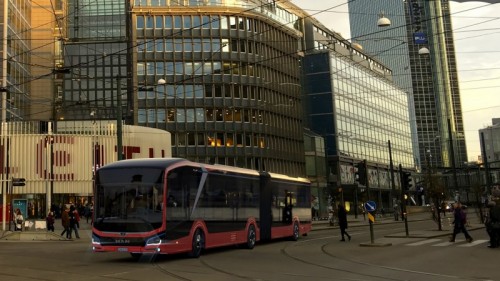 From green roofs to rental bicycles and electric vehicles: Oslo is a pioneer in environmental protection. Now Unibuss, one of Norway’s largest bus companies, has ordered 76 all-electric Lion’s City E buses for Oslo from MAN Truck & Bus. For MAN, this is the first e-bus order from Norway and for all partners it is another important step in sustainable mobility.

No other capital city in the world has a higher proportion of electric cars than Oslo. Trams and ferries are powered by electricity from hydropower. And more and more electric buses are also on the road in Oslo. The Norwegian transport operator Unibuss, for example, has now ordered 76 Lion’s City E from MAN Truck & Bus – including 59 solo and 17 articulated buses. “We are very pleased about our first e-bus order from Norway, which fits seamlessly into a series of orders from Scandinavia – a great success!” says Rudi Kuchta, Head of Business Unit Bus at MAN Truck & Bus.

22 MAN Lion’s City E are already in service in Malmö, Sweden. KEOLIS also ordered a total of 75 Lion’s City 18 E for Sweden last year. Of these, 60 articulated e-buses will go to Gothenburg and 15 to Stockholm. In addition, 10 Lion’s City 12 E are to be used in the Swedish capital. Another order for 12 articulated e-buses from MAN came from Uppsala. In addition, the framework agreement with Gamla Uppsala Buss includes an option for a further 65 electric buses. And Denmark is also relying on the MAN e-bus. Residents and visitors to the capital Copenhagen are chauffeured in 26 MAN Lion’s City 12 E buses. Twelve more e-buses were also delivered to Vikingbus in Odder. This means that 38 electric buses are now making their rounds on Danish roads.

The fact that the Norwegian transport operator Unibuss also cares about innovation and sustainability can be seen in its existing fleet, which is already well positioned in terms of alternative drives. “For several years now, the bus company has been committed to sustainable local public transport. With the new 76 MAN e-buses, Unibuss is now taking another important step towards clean mobility,” emphasises Malte Kauert, Managing Director MAN Truck & Bus Nordics, and adds: “We are of course very pleased that the long-standing partnership with Unibuss is being continued. I am particularly proud of the team in Norway, which has made this significant success possible through close cooperation.” Delivery of the 76 MAN Lion’s City E is scheduled for the end of 2023. They will then be deployed in the north-east and east of Oslo – and thus in trendy city districts with many parks, museums and charming wooden houses.

“Oslo is to become the world’s first emission-free city by 2030. With emission-free public transport already by the end of 2023, an important part of the job is done. New electric buses in Oslo East mean cleaner local air, less noise, better comfort and reduced greenhouse gas emissions,” says Ruter AS, the local public transport authority (PTA) which will operate the buses in Oslo.

One of the reasons Unibuss decided on the MAN Lion’s City E was to significantly improve the CO2 balance in public transport. But the issue of flexibility also played an important role for the company. For example, the solo buses are equipped with 5 instead of 6 (standard) battery packs and the articulated buses with 7 instead of 8 (standard) battery packs. “Since this autumn, our customers have been able to decide for themselves on the number of battery packs,” says Kuchta and adds: “In this way, our all-electric city bus can be even better adapted to individual customer needs and requirements in terms of range and passenger capacity.”

More efficiency, but also more range, is also promised by the CO2 air conditioning system, which has been available as an option since mid-2022 – and which Unibuss has opted for. The new air conditioning system for the Lion’s City E is more environmentally friendly and at the same time significantly more efficient, which can provide an additional range of up to 25 km.

The safety of passengers, drivers and other road users is ensured by numerous assistance systems such as MAN BirdView, which provides a 360° bird’s eye view of the vehicle’s immediate surroundings, and the MAN OptiView mirror replacement system. The latter supports the driver by, among other things, eliminating the blind spot and significantly improving visibility at night and in poor weather conditions. Since this year, the innovative technology has also been available for all models of the new city bus generation – including the fully electric Lion’s City E.

“Our innovative technology convinced Unibuss, as did the comprehensive consulting on our eMobility solutions from the experts at MAN Transport Solutions,” Kuchta makes clear. “Among other things, they also calculated the routes for the optimal use of the buses.” And MAN will continue to provide the Norwegian public transport operator with the best possible support in the future. In addition to supplying the vehicles, MAN will also provide service and maintenance for the city buses for a period of up to 12 years. 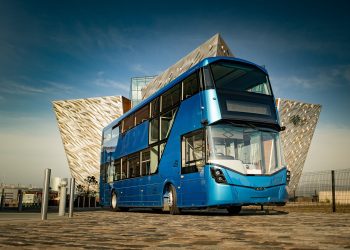 The Go-Ahead Group, the parent company of the Oxford Bus Company, has made its largest zero-emission purchase to date with...