by Casper Benedict
in Hyundai
0 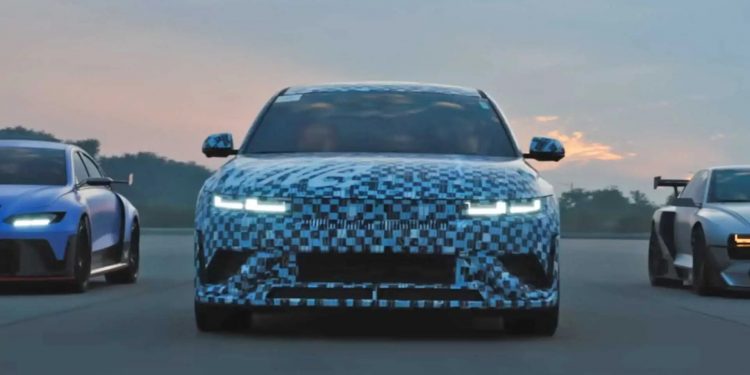 The Hyundai N has long been known for its ability to build hot hatches, performance crossovers, and sports sedans that are as good as its competitors.

It looks like that will continue in the electrification era anyway and starting with the Ioniq 5 N, which the company just teased in a new “rolling lab” video.

The Ioniq 5 N only makes a brief appearance in the last few seconds of the video and is shown alongside the RN22e and N Vision 74. Having the Ioniq 5 N in the video means that full disclosure should be very close, possibly in early 2023.

While the video doesn’t reveal much about the Ioniq 5 N, it’s not hard to imagine the car’s sleek, sculpted look reinforced by a more aggressive bumper, lowered suspension, and bigger wheels.

Hyundai hasn’t provided details on specifications yet, but rumors are that it will sport a dual-motor, all-wheel drive setup on par with that of its sister company Kia, the EV6 GT. That means a total of 577 hp (585 PS) driving through all four wheels and a zero to 62 mph (100 km/h) time of around 3.5 seconds.

One of the technologies awaited from the Ioniq 5 N is the eTVTC (electronic torque vectoring by twin clutch) transmission hardware which allows the RN22e concept to reduce understeer by dividing torque carefully between the left and right wheels, almost as if it were running a quad setup. -motorcycle.

The RN22e also has the capability of adjusting the torque distribution between the front and rear wheels which can suck the rear wheels, something that is demonstrated many times in the videos.

Hyundai admits that driving on the circuit can generate a ton of battery heat that comprises EV performance, but says it’s working hard to ensure its electric N car won’t give up after a few laps on track day. And it is claimed that the careful tuning of sound and physical sensations in the car will help to recreate the joy we feel driving a powerful internal combustion engine car.