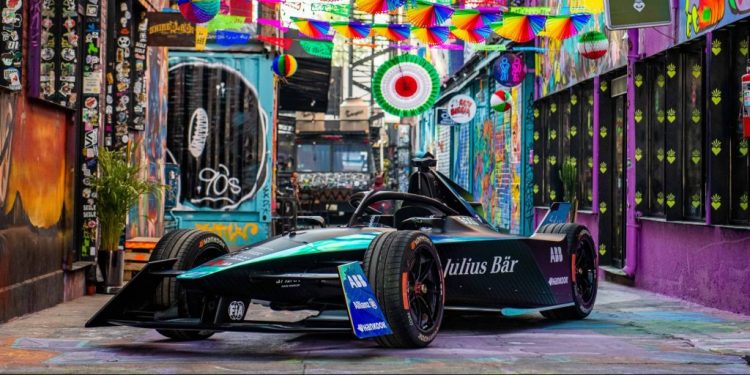 Formula E returns for the start of its ninth season this weekend at the Autodromo Hermanos Rodriguez in Mexico City. The season features the debut of the new Gen3 car, which is faster, lighter, and more angular. Additionally, new tracks have been added to the schedule. This is the first time that Formula E will kick off a season in Mexico City, as the previous four seasons were launched in Diriyah, Saudi Arabia. Note that unlike previous seasons, the opening race will be a single event on Saturday, so be sure to tune in on that day to catch the live action.

The high-altitude of Mexico City’s track at nearly 2,300m/7,500ft presents a unique challenge for combustion vehicles, as the thinner air results in less efficient combustion and reduced engine power. However, electric drive vehicles are not affected by altitude and can perform equally well at any elevation, making the track an ideal showcase for the strengths of electric drive technology.

This year’s Formula E car, the Gen3, boasts a new design with a more angular appearance and is smaller in every dimension. The smaller size allows for more room on the track and improved performance due to less weight. The most notable change, however, is in the powertrain. The Gen3 car has a boost in power to 350kW and a top speed of 200mph, but also includes a front motor for regenerative braking, making it the first Formula car with both front and rear powertrains. This allows for up to 600kW of power to be regenerated under braking, making the car more efficient and able to go further and faster than previous models.

The Gen3 Formula E car utilizes energy recovery from its motors so effectively that it no longer requires rear friction brakes. Instead, it relies solely on its 350kW motor for rear braking. The car still has front friction brakes, as the front axle does the majority of work during braking due to load transfer, but they are smaller since they are supported by the front motor.

However, even with two powertrains, the Gen3 car is not an all-wheel drive vehicle. Like other formula cars, it still gets all of its acceleration power from the rear axle. It is possible that all-wheel drive could be implemented in the future without a significant redesign of the car, which leaves open the question of whether this may be in the Gen3 car’s future.

The Gen3 Formula E car features a more powerful rear motor and all-weather tires from new supplier Hankook, which will test driver skill during corner exits. The braking experience will also be different and will take some time for drivers to adjust to. The car’s battery can also charge up to 600kW DC, which will be used in races, including mid-race charging pit stops, that will unlock “attack mode” which gives a boost in energy for a few minutes, adding more passing and dynamic to the race and demonstrating 600kW charging, twice the speed of the fastest consumer chargers.

The new technology in the Gen3 Formula E car resulted in a half-second faster lap time during pre-season testing in Valencia last month, despite some wet conditions which limited the number of dry laps. Although half a second may not seem like much, it is a significant difference in racing. As teams and drivers adjust to the new technology, it’s possible that the cars will become even faster throughout the season.

The new Formula E season will feature four new circuits that the series has never raced on before: Hyderabad, India; Cape Town, South Africa; São Paulo, Brazil; and Portland, Oregon. However, the race calendar is subject to change due to COVID-19, as previously planned race in Seoul, South Korea was cancelled and replaced by Cape Town. These new circuits still need to be certified by the FIA for race preparedness, so additional changes to the calendar may occur.

Hyderabad is the first race in India and home of Mahindra Racing, a popular team in the series. Cape Town is the first sub-Saharan location that Formula E will visit. São Paulo is the first visit to the motorsport-loving country of Brazil, though the series has previously visited nearby countries in South America. Portland will be the fourth location in the United States to host a Formula E race, following Long Beach, Miami, and New York.

The defending champion Stoffel Vandoorne, who won last year with Mercedes, has joined DS Penske (formerly DS Techeetah) team along with two-time champion Jean-Eric Vergne. Mercedes, last year’s constructor’s champion, has left the series and their team is now under the ownership of McLaren.

Other team changes include Nissan taking full ownership of the e.dams team, the return of ABT team with the help of Cupra after ending their relationship with Audi, DS breaking ties with Techeetah and partnering with Penske, and Maserati taking over the ROKiT Venturi team in their first return to racing as a constructor since the 1950s. In terms of drivers, several have shifted teams or left the series.

Two new drivers in the series this year are Sacha Fenestraz and Jake Hughes. Fenestraz, a French former Formula Renault Eurocup champion and Jaguar reserve driver, participated in the last race of last season and is considered a rookie this year. Hughes, a former champion of the BRDC Formula 4 (now known as GB3 championship) and Mercedes reserve driver, is making his debut with McLaren this weekend.