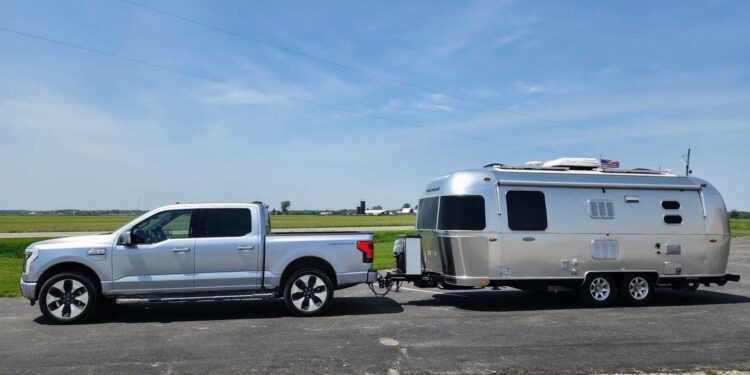 Ford has just started delivered the F-150 Lightning to retail consumers. Many positive reviews from users are mainly related to vehicle performance.

The same is true for other vehicles with internal combustion engines. But the Ford F-150 Lightning is a solid performer.

Nick tows a 23-foot-tall, 6,000-pound Airstream trailer for about 30 miles. He was traveling at 65 mph on a flat route. The F-150 Lightning is very capable and provides a solid overall experience. The truck exhibits strong and instant torque, which is key to pulling heavy loads.

Regarding vehicle efficiency, the data shown by Nick is 0.8 miles per kWh. Without a payload, the F-150 Lightning reaches 1.5 to 1.8 miles. There is a reduction in reach of about 50 percent.

“When you plug in your trailer and set the weight, height, length, etc., the Ford system auto-calculates your mileage impact. I plugged in at 85 miles, and when I finished the calculation, it stated I had 54 miles of range with the Airstream.” Nick said

According to Nick, the experience of using the F-150 Lightning to pull heavy loads is impressive.

Nick went on to share his impressive towing F-150 Lightning experience. He didn’t feel like he was pulling a heavy load because the truck accelerated very easily.

Nick said the experience of towing the F-150 Lightning was not much different from towing with the ICE version of the F-150. She also has a 2017 model.