by Michael Khan
in Commercial vehicles, Tesla
Reading Time: 2 mins read
A A
0 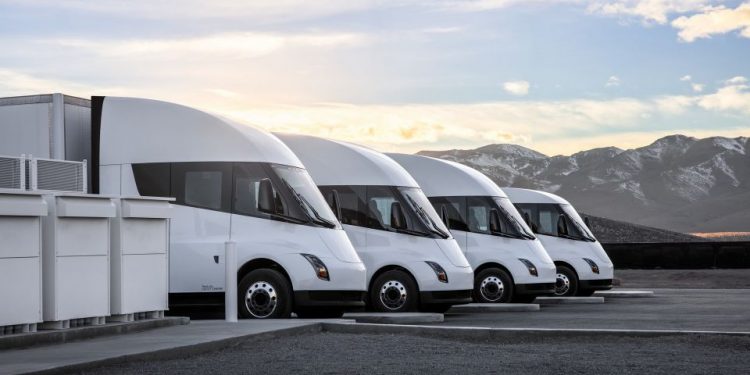 It was previously believed that Tesla would move production of its Semi Class 8 electric truck to its Giga Texas plant after low-volume manufacturing began in late 2022 at a private site near its Gigafactory Nevada facility. However, according to Nevada Governor Joe Lombardo, Tesla has announced plans to open a new $3.5 billion plant in Northern Nevada for the production of the Semi.

This official announcement was made on January 24th during Lombardo’s State of the State address to Nevada’s Assembly and Senate. Governor Lombardo highlighted that Nevada is actively inviting the expansion of new businesses and industries, as part of a pro-development initiative to restore the state’s reputation as a pro-business environment.

“Whether it’s closing the lithium loop, unlocking innovation and investment in logistics, entertainment, science and technology, or embracing entrepreneurship, the message is, that Nevada is ready to partner. Case in point… I am looking forward to joining Elon Musk and the team at Tesla tomorrow when they unveil plans to build a brand new $3.5 Billion-dollar advanced manufacturing facility in northern Nevada for the company’s all-electric semi-trucks.” said Nevada Governor Joe Lombardo

BREAKING: Nevada Governor, Joe Lombardo, has announced in his State of the Union address tonight that he will be joining Elon Musk & the team at @Tesla tomorrow to unveil plans to build a new $3.5 billion advanced manufacturing facility in northern Nevada for the @Tesla Semi. pic.twitter.com/lluv86pTHU

According to reports, Tesla CEO Elon Musk is set to make an official announcement regarding a new investment today. The announcement is expected to take place at the site of the new manufacturing plant, the location of which is yet to be confirmed.

Tesla already operates a large factory in the state, the Gigafactory Nevada, which produces battery packs and electric motors for its electric vehicles (EVs) as well as its energy storage products, the Powerwall and Powerpack. The Gigafactory Nevada is located 24 miles east of Reno in the northern part of the state.

It has been speculated that the new facility could be an expansion of the separate manufacturing line for the Semi, which was reportedly established in October 2022 in a new building near the main plant. However, it is also possible that Tesla will announce a completely new site. Updates will be provided as soon as the EV maker makes an official announcement.