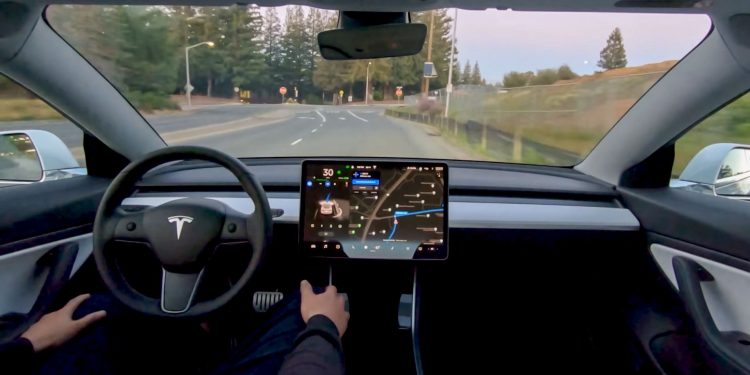 Forced Autopilot Disengagements occur when the system detects that the driver is not paying attention and gives multiple warning signals, such as audible alerts and visual alerts. If the driver does not respond to these warnings, the system will automatically disengage and the driver will have to take control of the vehicle for the remainder of the trip.”

“Full Self-Driving (Beta) Suspension – For maximum safety and accountability, use of Full Self-Driving (Beta) will be suspended if improper usage is detected. Improper usage is when you, or another driver of your vehicle, receive five ‘Forced Autopilot Disengagements.’ A disengagement is when the Autopilot system disengages for the remainder of a trip after the driver receives several audio and visual warnings for inattentiveness. Driver-initiated disengagements do not count as improper usage and are expected from the driver. Keep your hands on the wheel and remain attentive at all times. Use of any hand-held devices while using Autopilot is not allowed.

The FSD Beta feature can only be removed per this suspension method and it will be unavailable for approximately two weeks.”

Is a two-week ban from using the Full Self-Driving Beta feature, for which users may have paid up to $15,000, a harsh punishment? Despite appearances, this penalty is actually more lenient than the previous one.

Before this new policy, Tesla would remove users from the Full Self-Driving Beta without any indication of when they might be reinstated. The length of the ban could be weeks or even months, and it was entirely at Tesla’s discretion. Now, the company has established a clear and consistent penalty procedure for all Full Self-Driving Beta members.

It’s important to note that, despite its name, the Full Self-Driving Beta from Tesla is not fully autonomous. In fact, it is only considered Level 2 on the Society of Automotive Engineers’ scale of driving automation, which means it is classified as a support system that requires the driver to be fully attentive at all times.
In the state of California, using the term “self-driving” to describe this technology is actually illegal. At present, there are no vehicles available for sale in the United States that are classified as Level 3 on the SAE’s five-level scale for autonomous driving. This is the lowest level at which a vehicle can be considered truly autonomous.
Source: Teslarati
Tags: 2022.44.30.5AutomotiveautonomAutonomousautopilotcompanyFSDFSD BetasoftwaresuspensiontechnologyUSA
Previous Post