by Andy Williams
in Afeela, News
0 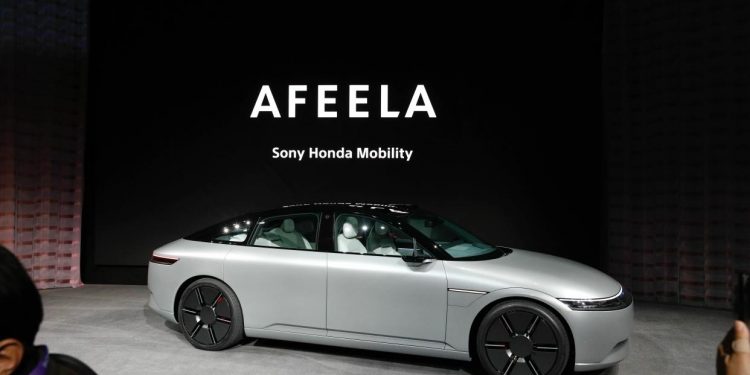 Sony Honda Mobility, a joint venture between Sony and Honda, has announced the name of its new electric vehicle brand: Afeela. Both companies are major players in the technology and automotive industries in Japan.

The vehicle will feature a digital chassis provided by Qualcomm and was unveiled at the CES technology trade show in Las Vegas. This move marks Sony’s foray into the rapidly expanding electric vehicle market and allows the company to leverage its expertise in entertainment content and sensors for use in the vehicles.

The Afeela electric vehicle, which has a sleek black roof and rounded corners, will be equipped with more than 40 sensors, according to Yashuhide Mizuno, CEO of Sony Honda Mobility. It will also utilize Epic Games’ “Unreal Engine” 3D creation tool, known for powering the popular “Fortnite” series of games.

Afeela represents our concept of an interactive relationship where people feel the sensation of interactive mobility and where mobility can detect and understand people and society by utilizing sensing and AI technologies.” said Sony Honda Mobility CEO Yasuhide Mizuno

The new Afeela electric vehicle prototype, developed by Sony and Honda’s joint venture company, bears a resemblance to Sony’s concept car from CES 2020. This EV has a Sedan-like design and includes a display bar on the front.

There are also rumors that it will feature a PS5 as an entertainment system. The Afeela brand will be available for pre-order in the US in 2025, with sales beginning in 2026. It is expected to later be released in Japan and Europe. What are your thoughts on the new Afeela EV? Share them in the comments below.