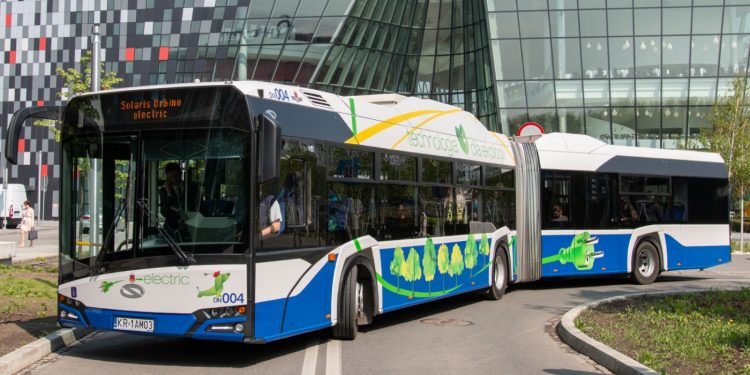 Solaris, a bus manufacturer from Poland, received an order for 20 electric buses from the public transportation company MPK Kraków.

MPK Kraków ordered seven articulated Urbino 18 electric buses and 13 single Urbino 12 Electric buses to be delivered within the next year.

The electric buses ordered by MPK Kraków will complement Solaris’ previous fleet of zero-emission buses that debuted on city roads in 2016.

The electric buses ordered by MPK Kraków use Solaris High Energy batteries with a total capacity of almost 300 kWh on solo buses and more than 400 kWh on articulated buses. Each bus will also be designed for plug-in charging as well as a pantograph.

The ordered solo electric bus can carry up to 81 passengers and 141 people for the electric trailer bus.

The order value of the Solaris electric bus from MPK Kraków is around 14.5 million euros. More than half of the cost of procuring the electric buses will be co-financed with subsidies from the National Fund for Environmental Protection and Water Management.

In June this year, MPK Kraków began hydrogen testing of the hydrogen-powered Urbino 12. Meanwhile, Kraków Transport ordered a total of 50 electric articulated buses from Solaris by mid-2020, following the 20 Solaris electric buses that will start operating in 2017.