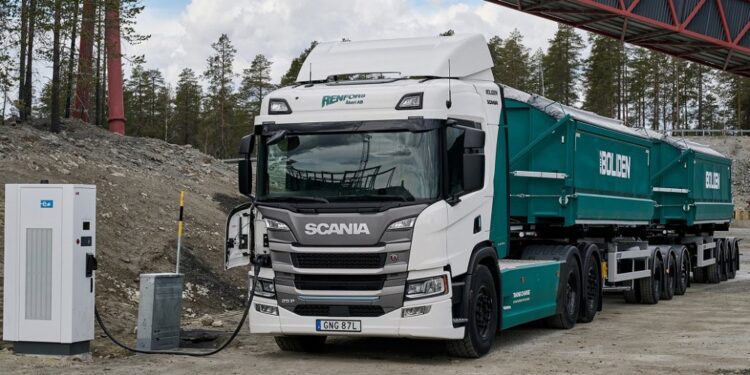 Swedish mining company Boliden has put into operation its new electric tipper truck, the Scania 25P BEV 6×2. The truck transports a total payload of up to 2,000 tonnes of gold ore for 19 hours a day from the Renströmsgruvan mine to the Concentrator plant in Boliden.

The new electric truck, which Boliden obtained from Scania, is a means for the mining company to reduce the intensity of CO2 emissions by 40 percent by 2030.

Peter Bergman, General Manager of Boliden revealed that the tipper truck is the first of several Boliden operational missions on electrified public roads, and the company sees this as the first step towards more sustainable transportation. The company wants to use more electric vehicles in the future.

“We want this truck to run as fast as possible. When it needed to be filled, we used other vehicles, but this was our first choice of transportation on this mission. Once we learned that this electric truck works in a demanding environment, we wanted to include this transportation to smelters and other mines in the area,” he said in a statement, Thursday (9/6/2022).

This electric truck solution is based on the technology used for trucks currently manufactured at the Scania plant with the addition of more robust components. This strong load capacity and extended reach will be part of Scania’s production within two years.

Scania’s Head of E-mobility, Fredrik Allard, admitted that Scania had guided Boliden on how to optimize the operational flow used by trucks today, and also looked at the possibilities that lay ahead.

“We work together. This is a partnership that involves an amazing product, a vehicle that is not included in our regular production.”

This 74-ton Scania 25P electric truck is part of Regional Electrified Logistics (REEL), an initiative led by the transport efficiency platform ‘Closer’ that leverages the support of the Fordonsstrategisk forskning och Innovation (FFI) program to pave the way for the transition to electric transport in the marketplace. Sweden.