by Shaun Williams
in Brand, Ford
0 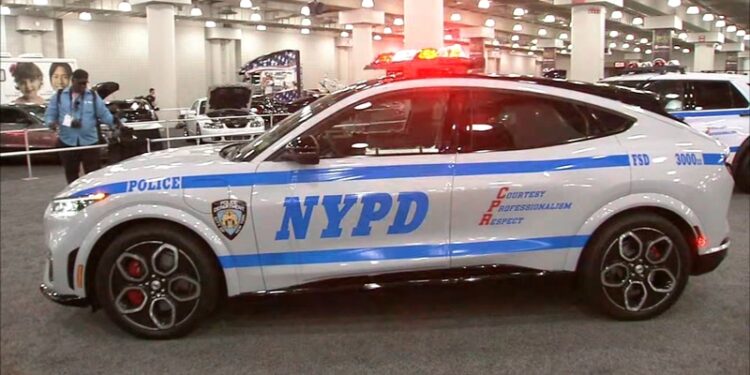 The New York Police Department has stepped down to introduce its newest patrol car, the Mustang Mach-E. In total the NYPD has 184 Ford Mustang Mach-Es in an effort to green up their fleet.

The Mustang Mach-E that the NYPD uses is equipped with flashing lights on the roof and on the grille, which is standard for NYPD vehicles.

Today starts the 2022 @NYAutoShow at the @javitscenter. If you're in attendance, you may see our newest electric vehicle as we move to a greener fleet, the @Ford Mustang Mach-E.

Stop by and say hello! pic.twitter.com/iDClnRYcvs

Doors and windows are equipped with ballistic panels. From behind, a high-vision reflective material will keep officers safe. The car also has a roof-mounted message board that can display scrolling text.

Michigan State Police in september received a Mustang Mach-E shipment to be evaluated as a patrol car. Evaluations indicated that the dashboard and engine compartment of the Mach-E were not easily accessible. However, the NYPD appears to have overlooked these shortcomings.

To green their patrol cars, the NYPD has also received approval for up to 250 Tesla patrol cars. Now, they are installing charging stations in several places.