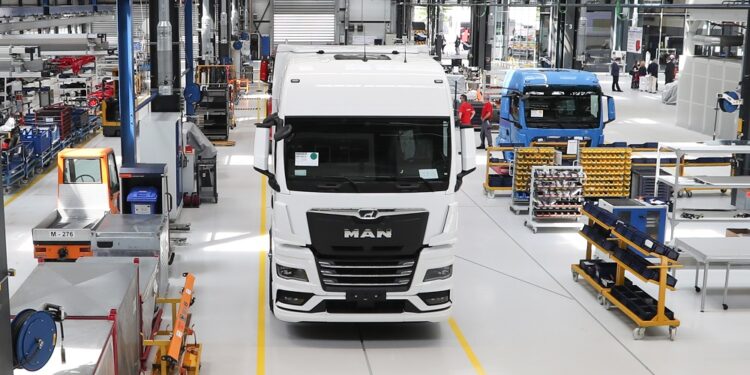 In the first 12 months since the innovative eMobility Center was established at its main plant, MAN Truck & Bus has launched 20 heavy-duty eTruck prototypes as test models for future mixed series production with conventional trucks in real-life conditions.

The CEO of MAN Truck & Bus, Alexander Vlaskamp, ​​explained that the construction of the MAN eMobility Center in mid-June 2021 was a clear start for the modernization of the plant as part of the transformation and also for the upcoming electric series production.

“MAN is preparing for the future of electromobility and driving its transformation into a provider of sustainable transport solutions for climate-friendly road transport. Our heavy-duty eTruck is scheduled to be launched from the production line in Munich in early 2024,” he said, Monday (20/6/2022).

In addition, conventional trucks and battery-electric trucks will be produced on the same production line in the future to ensure the best possible utilization of the production facility in Munich which is a huge challenge for machines, technology and human resources.

Thorsten Campehl, Manager of the MAN Factory in Munich, Germany, explained that more than 1,700 MAN employees have completed high-voltage awareness training, and it is hoped that by the end of the year this figure will increase to 2,000 employees.

“By the end of 2023, all relevant professionals in truck production in Munich must qualify for series production of electric trucks. It is this intensive combination of theory and practice that makes the eMobility Center concept truly unique,” explains Campehl.

For information, previously MAN has introduced its electric truck model to the public which will begin to be marketed in 2024. The special technical feature of the electric truck is the megawatt charging which makes its high charging capacity with short charging time make this electric truck suitable for long-distance transportation. heavy duty range with daily mileage between 600 and 800 km.