by David Smith
in Ford, News
Reading Time: 1 min read
A A
0 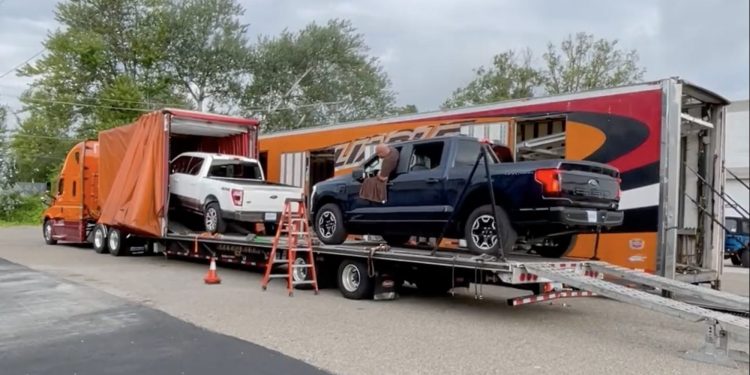 Electric vehicles are huge power banks that can be used for emergency power needs. The F-150 Lightning was recently used to provide portable power during Kentucky’s flood response.

Ford has sent two electric F-150 Lightnings to help with Kentucky’s flood response, providing transportation for crews to help 10-15 families return to their homes per day.

Massive flooding has hit Kentucky since late July, resulting in 37 deaths and tens of thousands of Kentucky residents living without electricity. The water level is an all-time record for the region, and is described as a weather event with a 0.1% chance of occurring in any given year.

Power outages made it difficult for disaster response crews to turn on their equipment. The electric F-150 Lightnings electric truck has proven to be a reliable source of portable power.

Kentucky is part of our @Ford family, so we’re working w/ @FordFund to support the communities affected by the devastating floods by sending #F150Lightning Pros & F-150s w/ Pro Power Onboard. The trucks will be used for cleanup efforts & mobile power sources in the region. ⚡️💙 pic.twitter.com/MNlFR0w2On

The F-150 Lightning electric truck is equipped with “Intelligent Backup Power”, which can be used as a power source for homes. This technology is commonly referred to as “vehicle-to-home” or “vehicle-to-load.”

The F-150 Lightning electric truck provides up to 9.6kW of power through ten 120v outlets and one 240v outlet. With a base 98kWh battery, that power can last up to 10 hours on maximum usage.

The power is used to run power tools, lights, and fans to help clear debris from the street and perform “stool removal” on flooded homes.

Tesla Model Y will be the world’s highest-selling car by revenue in 2022, and by overall volume in 2023

Tesla Model Y will be the world's highest-selling car by revenue in 2022, and by overall volume in 2023