by Shaun Williams
in Modification, Tesla
Reading Time: 2 mins read
A A
0 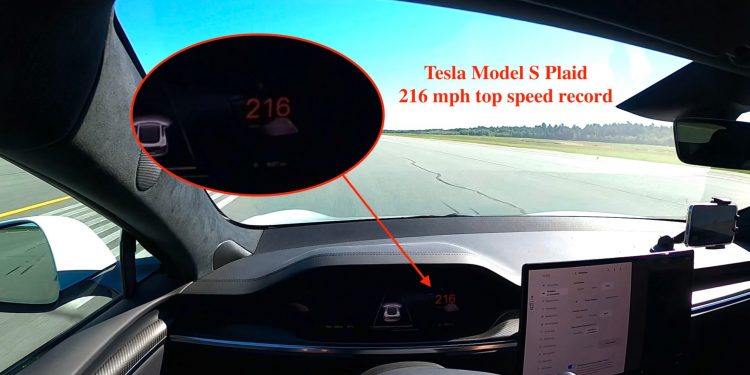 This is the highest speed a Tesla Model S Plaid or any other Tesla vehicle has achieved to date. This record was achieved after hacking some software to remove the limitation of reaching the top speed.

It’s not clear what exactly prevents Tesla from activating the promised top speed of 200 mph. It could be the brakes, which Tesla is now offering to upgrade with a $20,000 carbon ceramic kit, or it could be a battery pack.

The speed record was achieved by the Tesla Model S Plaid, when driven by Guillaume Andre, CEO of Ingenext, at Trois-Rivieres airport in Quebec, Canada. He drives a Model S Plaid he hacked to try to break the top speed record.

Trois-Rivieres Airport has a 3 km or 1.8 mile long runway which is perfect for testing. Andre only needed a distance of about 2 km or 1.2 miles when testing his Tesla Model S Plaid to reach the top speed.

He started decelerating from about 0.9 km or 6,000 feet, and almost the entire distance was spent demonstrating higher performance brake performance, but the effort paid off. That voice is the craziest thing. Sounds like a jet taking off just right.

The Plaid Ingenext S model is essentially a standard production vehicle except for the larger brakes from Mountainpass Performance and higher performance tires (Michelin Pilot Super Sport) for safety reasons. This is the only modification of Ingenext’s modules, allowing them to bypass Tesla’s software limitations.

Ingenext, the Quebec-based company better known for selling modules that help unlock software-locked features in Tesla vehicles. As a result, Ingenext managed to overcome the software bottleneck in the Tesla Model S Plaid car to fully unlock it to reach top speed.