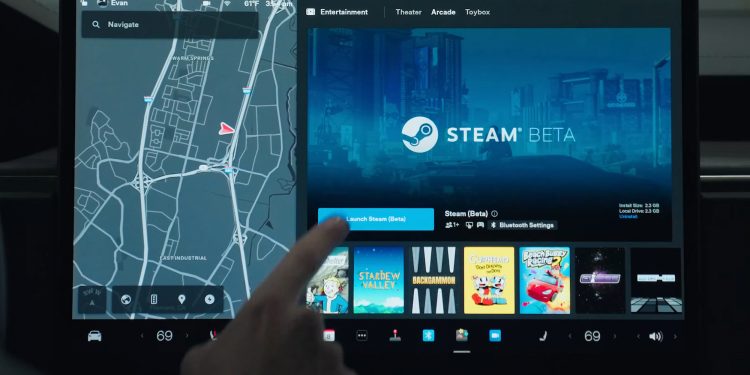 As usual, at the end of each year Tesla rolls out a new software update known as a “holiday update”. And this time Tesla is bringing a major update by bringing with it Apple Music, Mahjong, and more features.

Tesla regularly pushes new features to its electric vehicles via software updates whenever they’re ready, but occasionally bundles them together for larger step-change updates, what people call “holiday updates.”

This year, the biggest new feature is the Apple Music app integrated into the vehicle – joining other music streaming apps already in the car, such as Spotify and Tidal.

Tesla will add Apple Music to its vehicles as a part of the Holiday Software Update. After it was spotted on a Tesla unit within an exhibit at the Petersen Automotive Museum last month, speculation seemed to indicate the automaker would finally add the feature. It has officially arrived.

“Stream over 100 million songs and 30,000 playlists ad-free. Listen to your entire library, discover new music and tune into live radio stations. To access Apple Music, tap the Apple Music icon in the Application Launcher, scan the QR code with your mobile device, and login with your Apple ID,” Tesla wrote in the release notes.

Tesla also added Steam which makes users have more choices to play games. Tesla says Steam will be available on “new” Model S & X vehicles. While that’s a somewhat vague description, it seems likely to refer to the “Plaid” versions of those cars, as those are equipped with an AMD Ryzen processor and a discrete AMD RDNA 2 GPU. The company says that Steam brings “thousands” of games to its cars, and while we’ll have to wait and see which ones work best, Tesla’s promotional video heavily features Cyberpunk 2077.

You’ll also be able to make Zoom calls from the cabin camera and view the inside of the car from the Tesla app while in Dog Mode or Sentry Mode. The update, officially numbered 2022.44.25.1, is rolling out now.