by James Bryant
in Tesla
Reading Time: 2 mins read
A A
0 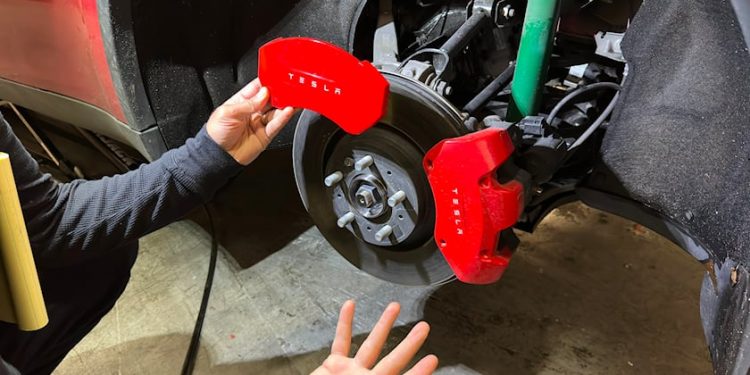 ZEVcentric, an EV motorsports company based in California, has accused Tesla of using smaller and less capable brakes on their Model Y Performance vehicle. In a video shared on Twitter, ZEVcentric, a supplier of aftermarket Tesla performance parts, claims to have identified the new parts as being distinct from typical brakes.

“It’s a smaller caliper and a smaller rotor which is the same on [the Long Range]. So now you are just paying for the same brakes, just red,” the shop commented.

As we took delivery of our 2023 Model Y last month. At some point Tesla decided to put caliper covers on the Performance Y. What does that mean? It's a smaller caliper and a smaller rotor which is the same on LR. So now you are just paying for the same brakes just red. pic.twitter.com/FXinpySrTu

Tesla allegedly made changes to the brake system on their Model Y Performance last year, using oversized red-painted brake caliper covers to conceal the use of less capable brakes. This, according to EV motorsports company ZEVcentric, is similar to modifications often seen on poorly modified vehicles.

Upon closer examination, ZEVcentric discovered that the rotor on the performance version of the Model Y is 2mm thicker than the previous version. The company also noticed that the front braking system appears similar to the Long Range parts, but is still manufactured by Brembo.

ZEVcentric believes that customers will be disappointed by this change, stating that “You pay for an upgrade and don’t get an upgrade. Paint is not an upgrade in my book, much less a ‘performance’ one.” Tesla lists “performance brakes” as a feature of the Model Y Performance, however, it seems that this may no longer be the case.