by Casper Benedict
in News
0 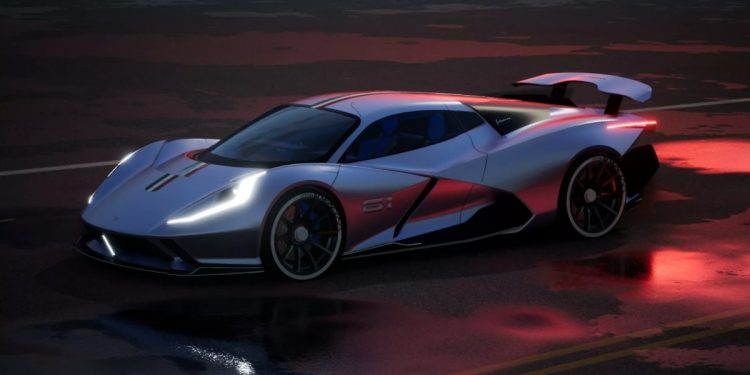 The Estrema Fulminea, boasting a impressive 2,012 horsepower, is set to make an attempt at breaking the electric vehicle record at the Nurburgring track this fall. The production version of the vehicle is scheduled to be revealed in June, with plans to tackle the Nordschleife circuit in September. It has been some time since there have been updates from Automobili Estrema, but it appears that they have been busy preparing for this highly anticipated record attempt.

Automobili Estrema plans to bring the Estrema Fulminea to the Nurburgring track in September to attempt to set a new electric sports car lap record on the Nordschleife circuit. In a somewhat unusual move, the company has started a Kickstarter campaign to fund the costs of the record attempt. It is somewhat concerning that they are relying on crowdfunding to cover the expenses, but it remains to be seen how it will all play out.

To date, the Kickstarter campaign for the Estrema Fulminea record attempt has received 39 backers and has raised $12,040 out of the goal of $104,197. In addition to the record attempt, Automobili Estrema is also producing a documentary about the development of the Fulminea and the journey to the Nurburgring track, which will be released in nine episodes between February and October. It is important to note that there is a significant amount of risk involved in this project. The Kickstarter campaign acknowledges this, stating that as a startup company, there is a possibility that they may not be able to complete the Fulminea prototype and potentially miss the record attempt.

However, the company also expresses confidence in their passion, experience, and talent, and believes that these factors increase the chances of success. At this time, it is unclear whether this project will have a successful outcome. The company has stated that they are unsure if their story will have a happy ending, but they hope to find out together with the help of their backers.

Regardless of the outcome, the Estrema Fulminea is set to be a groundbreaking electric hypercar, featuring ultra-capacitors and a hybrid battery pack that combines traditional lithium-ion cells with solid-state cells from Avesta Battery Energy Engineering. The Fulminea is anticipated to have a combined battery capacity of at least 100 kWh and an impressive energy density of 500 Wh/kg. The batteries for the car are expected to weigh a mere 661 lbs, while the car itself will have a weight of 3,307 lbs.

If all goes as planned, the four motor Estrema Fulminea should be able to accelerate from 0-199 mph in under ten seconds and have a range of 323 miles in the WLTP cycle. The car is also expected to be able to go from a 10% to 80% charge in less than 15 minutes. Automobili Estrema has announced that initial production is underway and that they will only be building 61 units, with a starting price of €1,961,000.