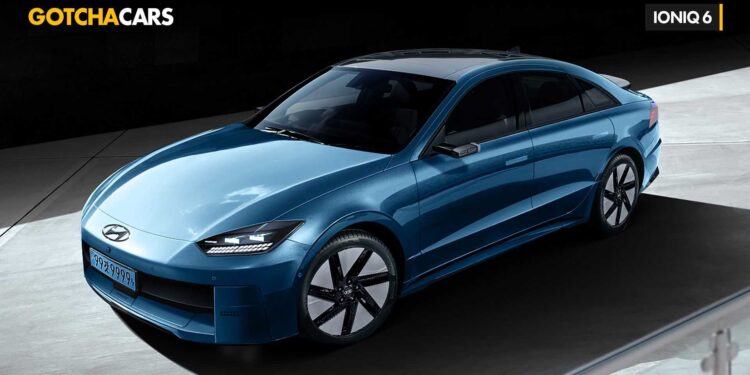 The name Ioniq is starting to become famous throughout the world. Moreover, the Hyundai Ioniq 5 won a number of awards including won the 2022 World Car Of The Year Award.

Hyundai’s pace in the electric vehicle race looks so aggressive. In fact, they do not hesitate to pour funds to build battery manufacturing factories in several countries.

The Ioniq 6 will take its base as a sedan. Our spy shots have revealed that the production version won’t be that simple, but we’re excited to see it anyway.

This speculative rendering shows the Ioniq 6 electric sedan in various colors and with multiple wheel designs.

This unofficial design takes a sneak peek of a disguised prototype, so it shouldn’t be too far from the original.

Design aside, it’s refreshing to see a new mainstream sedan in an EV world dominated by crossovers.

The Ioniq 6 has the right job for it as it will do battle with the Tesla Model 3 and BMW i4, but its E-GMP platform has proven very promising.

By the way, the Ioniq 5 uses the same architecture and was recently updated in Europe where it received a 77.4 kWh battery and a mirror replacement camera.

We can only hope that the future Ioniq 5 N will be followed by the Ioniq 6 N against the Model 3 Performance and i4 M50.

As seen on the Kia EV6 GT, this platform can churn out 576 horsepower and 546 lb-ft (740 Newton-meters) of torque. Those are some electric N models that can be utilized in the not too distant future.

See also: Hyundai Ioniq 6 will be revealed in the next few months

Hyundai seems to have made plans ahead by working on an SUV that is expected to come in 2024 as the Ioniq 7 with three rows of seats.

It was previewed last November by Seven Concept and looks set to be a big vehicle utilizing a dedicated electric platform, along with the Kia EV9 and the potential Genesis GV90.